Early in 2008 I found out that I was finally pregnant with our second child.  Cheetah was five years old.  We were all so excited.  I started working on UFO's and finished the quilt tops for these two quilts: 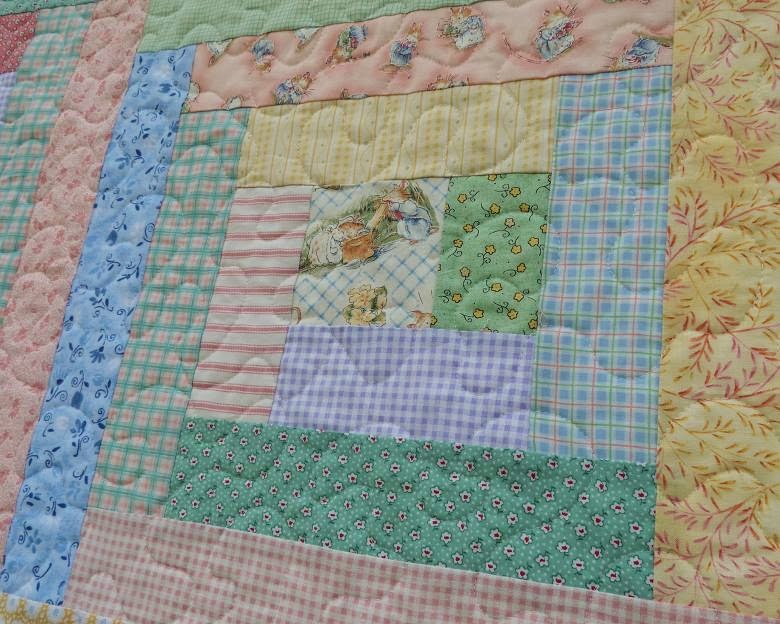 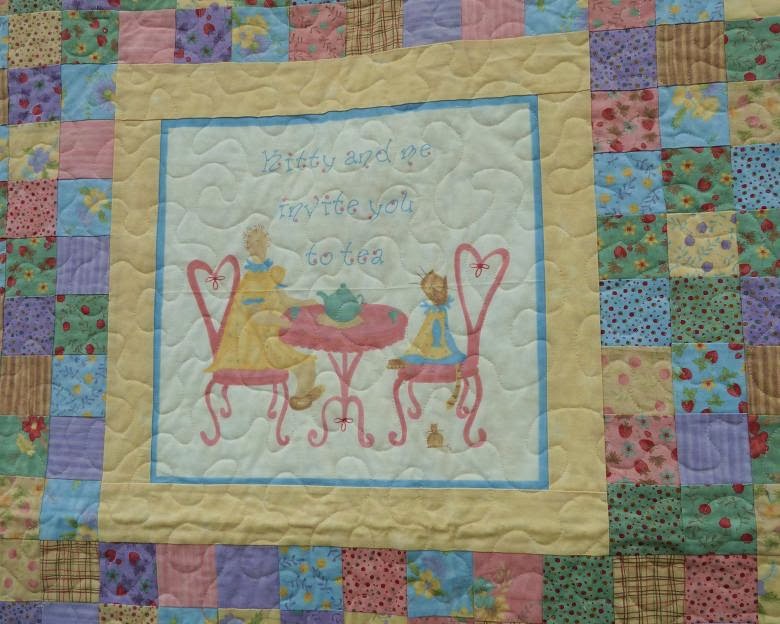 With the scraps of the Log Cabin, I made this cute table runner.  I found the pattern in an American Patchwork and Quilting magazine.  It was the first time I ever heard of a jelly roll.

I didn't want to quilt the tops until I knew if we were having a boy or a girl.  So I set them aside...for a few years.  We found out we were having a boy, so I went out to buy fabric.  I made this cute rag quilt after seeing a similar Double Four Patch at my local quilt shop. 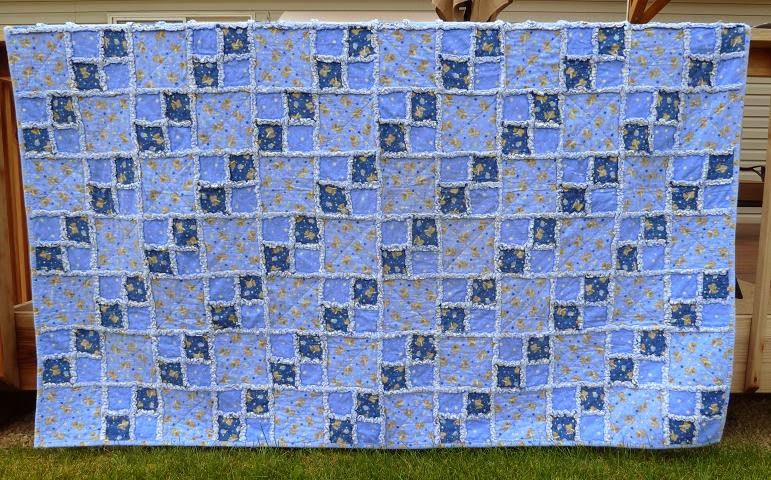 With the scraps of the double four patch I made the patchwork baby quilt you can see on the chair.  I also made bumper pads and drapes to match.  (The walls are really a pretty honeydew green.) 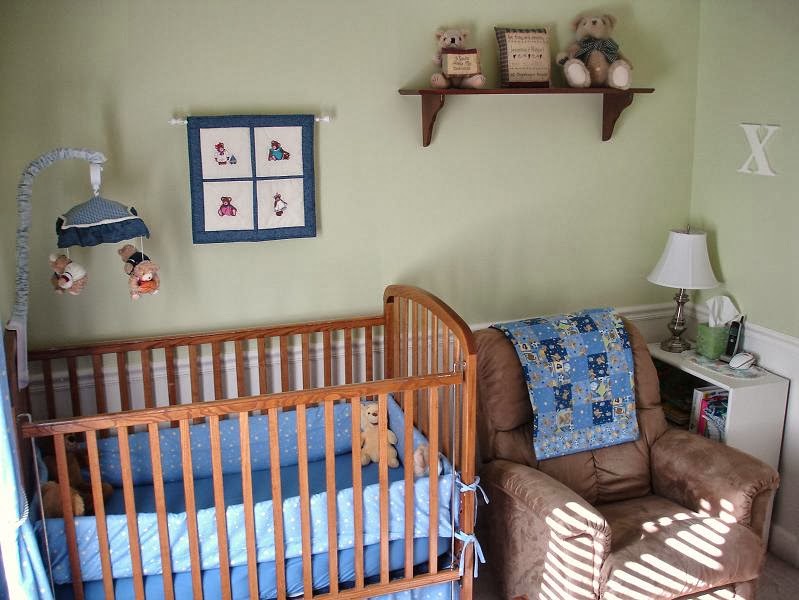 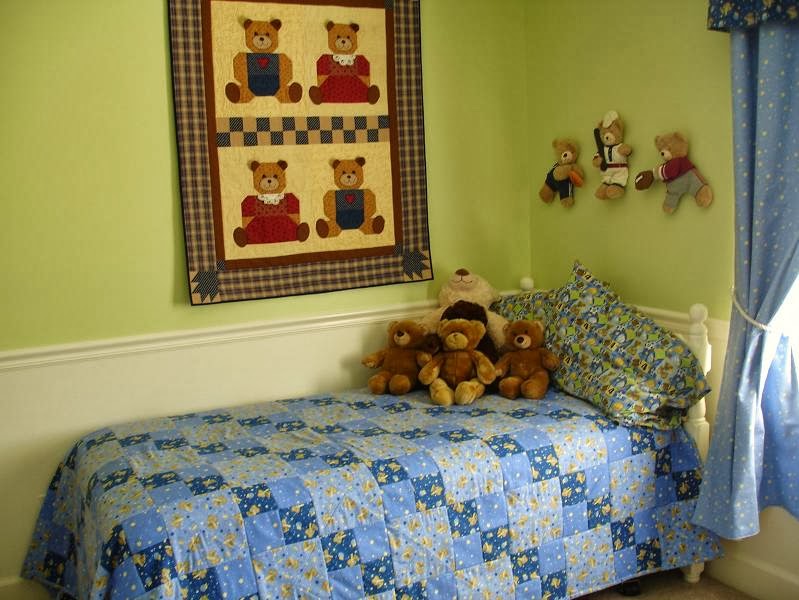 The nursery and big brother were ready for our little bear (who now calls himself Panda Man). 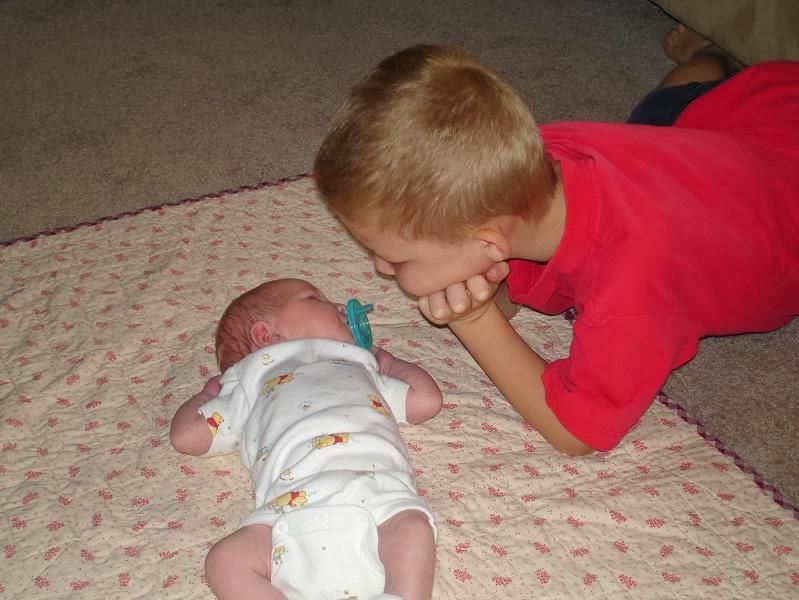 I wasn't able to get much quilting done with a new baby, because I was enjoying him and doing a lot of scrapbooking.  My only quilty finish this year were three table runners.  One for me, one for Mom, and one for a really close friend.  They were all using the same fabrics and were double sided.  I quilted them in clear thread for the top and bobbin.  It was tricky, but worth it to be able to use both sides.

I was able to quilt a few baby quilts for my mom.  They included Panda's frog blanket, 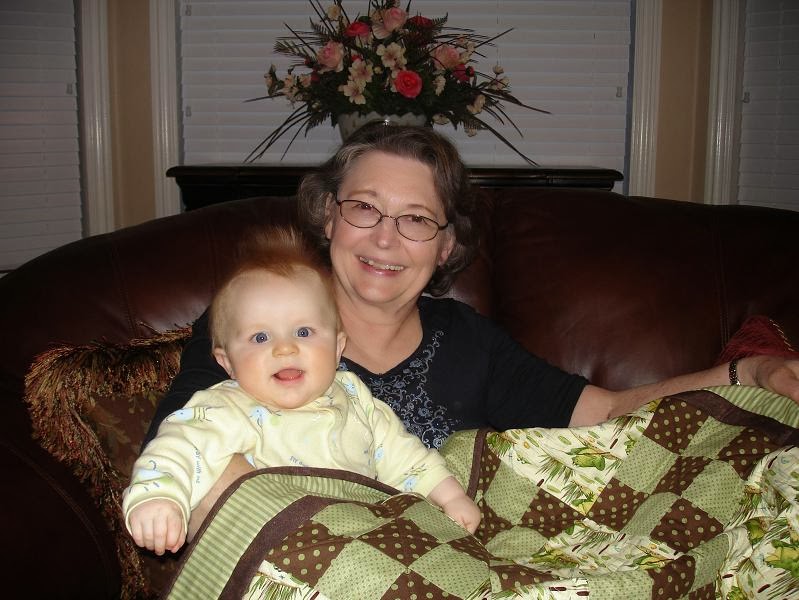 ﻿
and A's Baby Twist in pinks and browns. 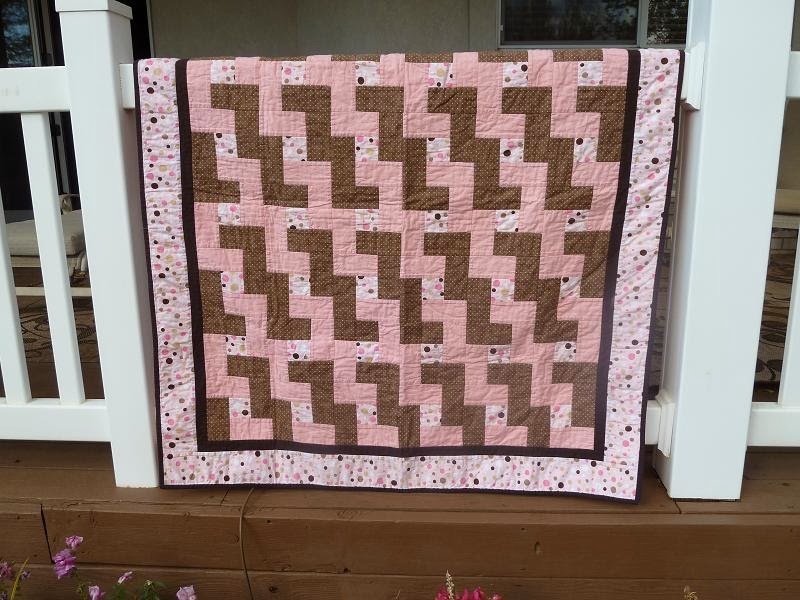 I was really busy this year chasing after two boys.  Little Panda Man had to be in speech therapy, so the only sewing I did was baby gifts.  I made flannel receiving blankets I serged around with woolly nylon thread.  They looked like this. This is the year that our little monkey was born.  We were thrilled that Panda and Monkey were only going to be three years apart.  Once I found out he was a boy, I decided to decorate the nursery in green and brown with monkeys. 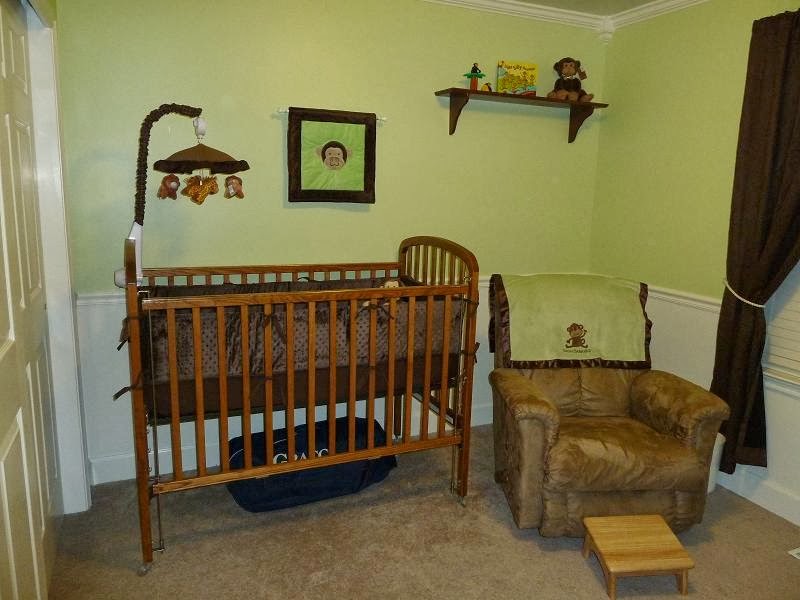 My mom made him this cute embroidery applique monkey blanket.  It is made entirely with minky.  I quilted it for her. 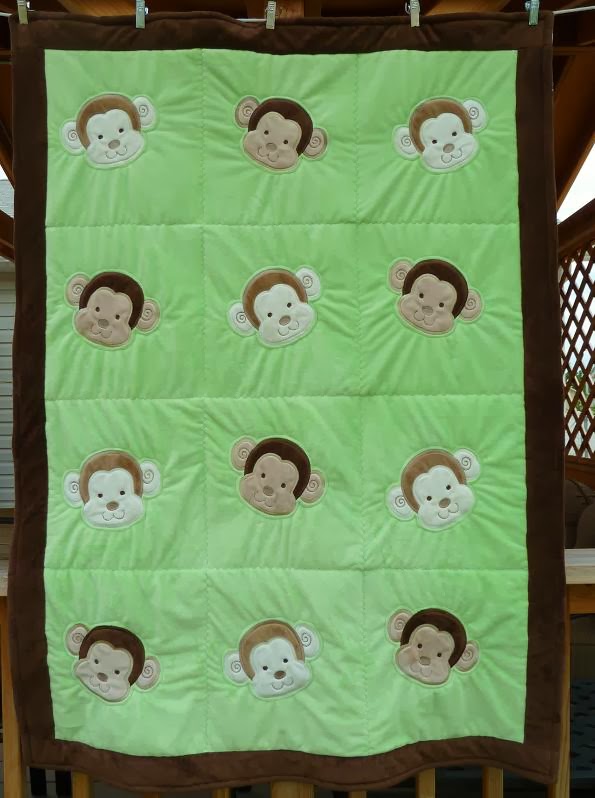 She embroidered a couple extra blocks which I turned into a wall hanging and a pillow.  I also made this tied comforter which you see on the bed.  I hung up the store bought *gasp* blanket on the wall.  He now likes to tell me that the monkey has bananas. 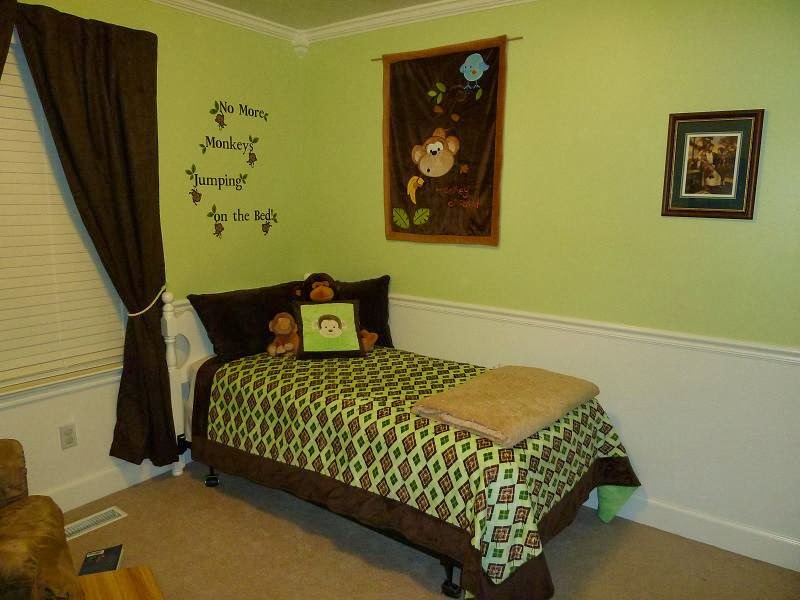 Once again the nursery was all ready for this little monkey.  (I even crocheted the afghan he is laying on.) 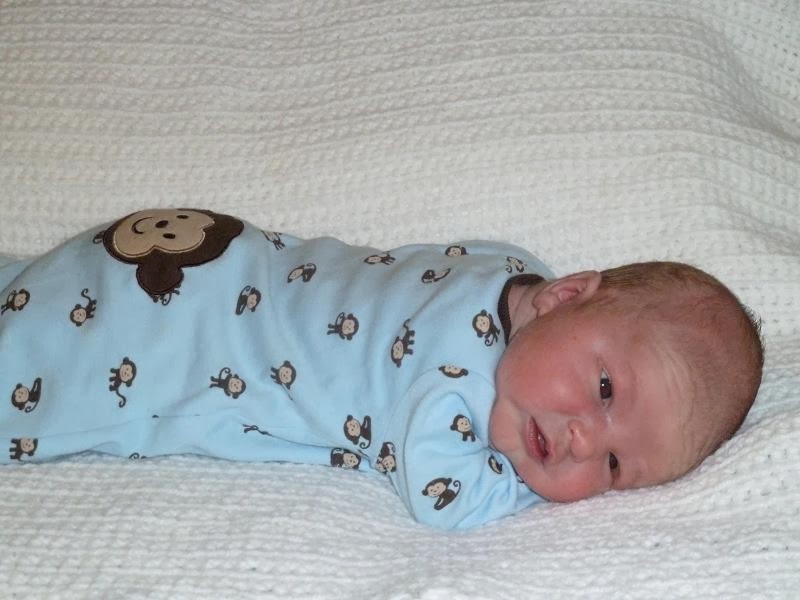 I also quilted this zoo animal embroidery applique quilt for my mother.  She gave it to Monkey's cousin. 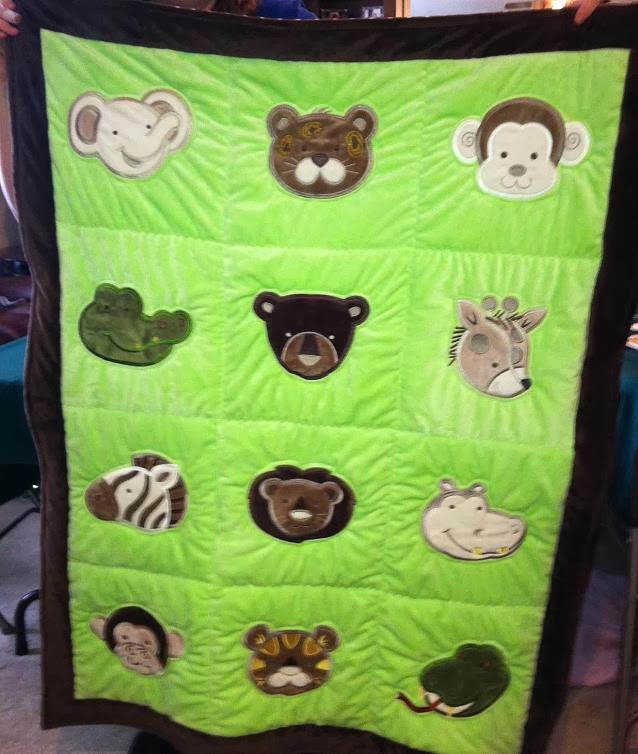 It wasn't until later that I realized I was not nearly as productive as normal, because I was going through postpartum depression.  I didn't realize how hard it was for me until I started to feel better towards the end of 2012.  My sweet husband was really supportive.  He actually did most of the grocery shopping for these years because I had such a hard time leaving the house.  I am very grateful for him, my three boys, and the things I was able to get done.

XX,
Jasmine
Posted by Jasmine at 7:30 AM

Email ThisBlogThis!Share to TwitterShare to FacebookShare to Pinterest
Labels: Review