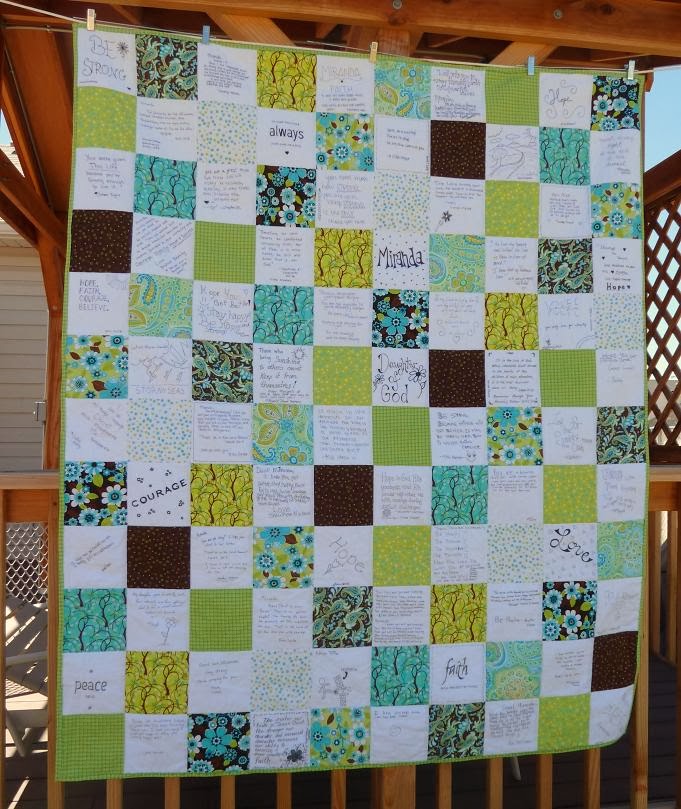 I was very pleased that I could take part in this special quilt for Miranda.  This quilt took just one week from planning to gifting.  I learned that if the Lord wants something done, then He will provide a way.

On Sunday, the Young Women's Presidency had a meeting and discussed the needs of one of the girls who was about to start chemotherapy.  They decided to make a quilt and have the youth sign blocks.

On Monday, I was asked if I would bind the quilt once it was finished.  I said that I would be happy to do anything that they needed.  Including the cutting, piecing, and quilting.

On Tuesday, I was brought the fabric (which was donated by one of the Young Women Leaders).  I cut it into 6.5 inch squares.  There are 60 white signed squares, and 60 print squares.  It worked out really well to make a quilt which was 60 x 72 inches.  There were 10 print fabrics and I was able to cut 6 squares (one strip) out of each fabric.  I put the print fabric up on my design wall. 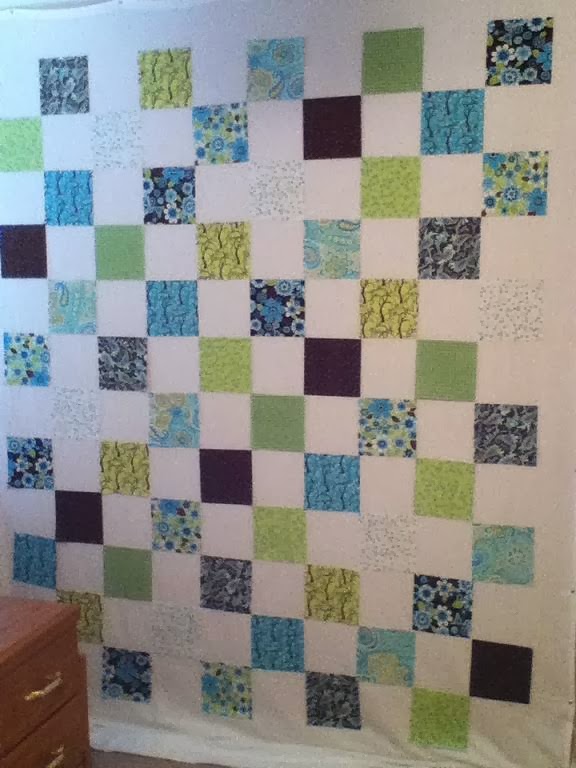 One amazing fact is that once I put this fabric up there, everything stayed in place.  There was one of each fabric in every two rows.  It went up pretty balanced, and I never had to trade anything.  (That was not normal, I usually move things around a lot.)

On Wednesday, the signature squares were taken to a youth activity for the youth and leaders to sign.  We had created a cardstock frame to lay over the white square, so that they did not write in the seam allowances.  The frames were cut with an outer square of 6.5 inches and an inner square of 5.5 inches.  (It worked really well.)  They used fabric pens and placed the squares on light sandpaper while writing to hold the fabric steady.

On Thursday, the rest of the squares were collected and signed.  I had all of the pieces up on the design wall by 10:00 p.m.  The signature squares were traded around constantly on my design wall throughout the day... until I had the very last square.  Then everything balanced and went together.  I started piecing the quilt top that night. 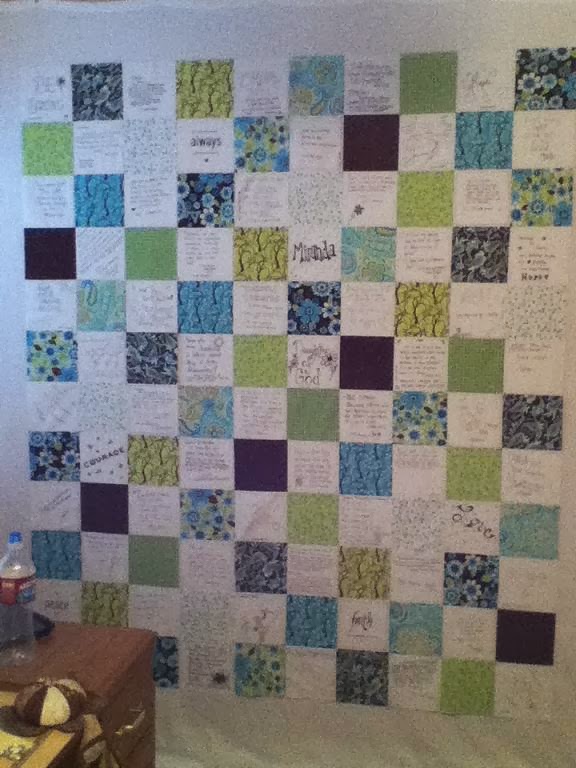 By Friday afternoon the quilt was finished.  I had gone to bed around midnight the night before, but could not sleep after 5:00 a.m. (another unusual thing for me).  So I got up and worked on the quilt.  I had felt a sense of urgency

On Saturday, I made this quilted tote bag for her to bring her quilt to the hospital for treatments.  The quilt fits perfectly in it. 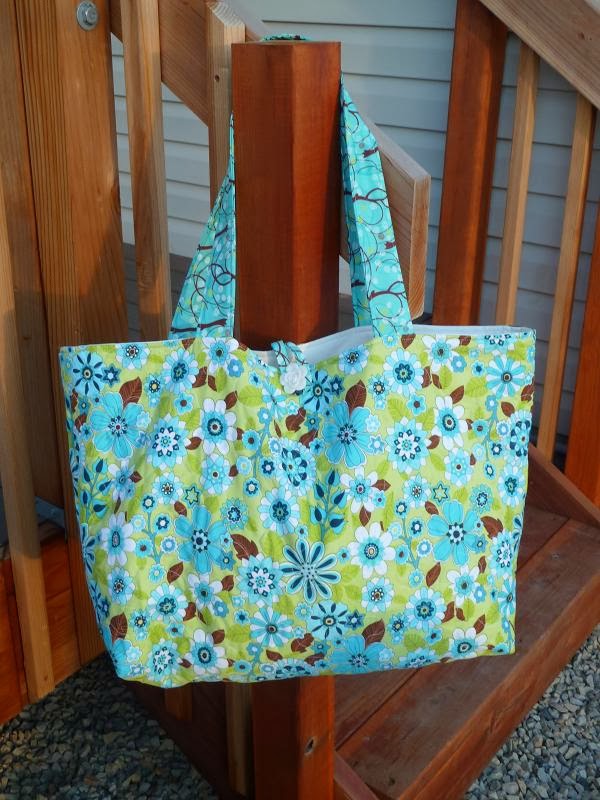 On Sunday,  the quilt was delivered to Miranda after church.

Finishing this quilt in one week really was a miracle.  Even one week later, I could not have finished the quilt so quickly--a stomach flu made its rounds through my family. 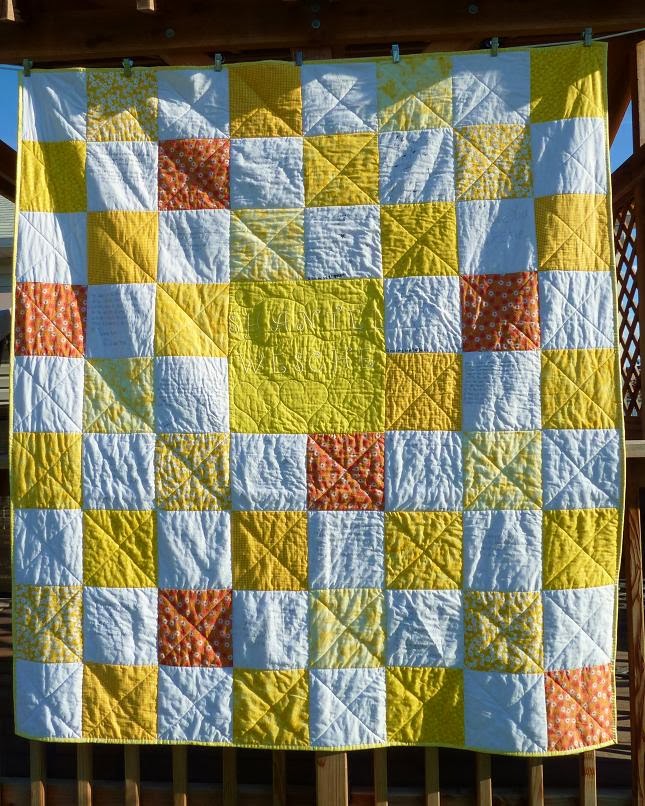 I was also very pleased to be able to help finish this quilt.  It was pieced by a friend for a family member who was starting chemotherapy.  The large center square was hand embroidered, and the central white squares were signed by members of her family.

Because these squares were signed after the quilt was pieced, I had to unpick one of the squares and rotate it.  One person had signed the quilt upside down.  :)

I did the machine quilting and the binding.  I decided to quilt in the ditch and with X's in the print and border squares, because these squares finish at 8 inches.